5 Types of Mental Health Crises During and After Pregnancy 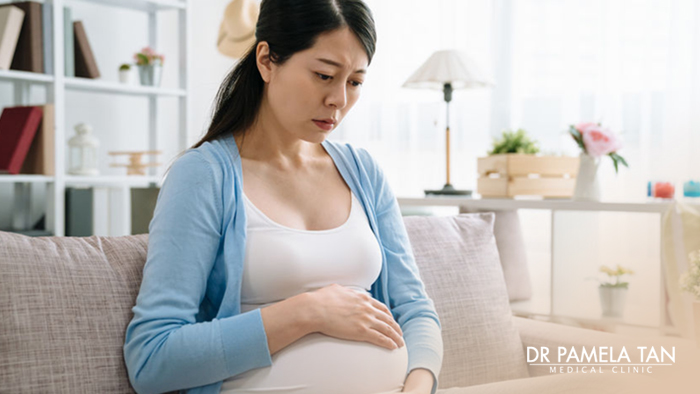 It’s not easy to admit that you’re not okay at a time when people would expect you to feel otherwise. In social media, pregnancy, childbirth, and delivery are often depicted through rose-tinted glasses through beautiful maternity photoshoots with friends and family sharing in your excitement. But this is not the case for you – and you don’t understand what’s going on.

It’s important to know that just as you would carefully attend to you and your baby’s physiological needs, your mental health during and after pregnancy is also a real concern. Learn about the different psychological issues you can possibly encounter and what can be done about it.

Perinatal is an umbrella term encompassing the time during your pregnancy up to a year after giving birth.

For some women, instead of reeling in excitement during their pregnancy, they find themselves dealing with antenatal depression. Locally, it affects one in five women. Even though it’s common, it’s not easily observed because people often mistake it for the mood swings expected during pregnancy.

Due to the relatively high levels of progesterone during the first trimester, women usually feel poorly around this time. However, hormonal changes alone don’t conclusively account for antenatal depression, it is an interplay of the following factors:

Since this type of mental crisis is less understood, it’s difficult for expectant moms to fully grasp what they’re going through, and for the people around them to understand. Some celebrities were brave enough to open up saying that antenatal depression can be isolating because friends and families would expect you to ‘snap out of it.’ Unfortunately, it’s not something you can nurse over a good night’s rest – or if sleep would even be restful at all.

Though it’s common, it’s not easily observed because people often mistake it for the mood swings expected during pregnancy.

To know if your mood changes need to be flagged out to your doctor, observe if you have the following signs and symptoms:

In the first trimester, treatment may come in the form of therapy, counselling and familial support. Antidepressants are not advised at this point, unless depression is severe, because it may harm the baby’s developing organs. However, these medications may be given in serious cases during the second trimester while gradually weaning as you inch closer to your delivery.

We have the tendency to attribute our feelings of stress to our hormones. But if what you’re going through is already beyond the normal worry and stress of pregnancy, and you find yourself being consumed by doubt and fear all the time, talk to your OB-GYN about it.

Post-natal/Postpartum depression should not be confused with baby blues. This deep emotional pain that comes 3 weeks after childbirth is marked by intense feelings of sadness, despair, and anxiety that prevent a new mom from doing her daily tasks. Meanwhile, baby blues involve mood swings and crying spells that typically lasts 2 weeks after giving birth.

Baby blues typically worsen by the fourth or fifth day, but the symptoms subside on their own after two weeks. Unfortunately, a few develop postpartum psychosis, which is a rare but life-threatening disorder that requires immediate treatment. Postpartum depression lies between these two states and it can last up to a year.

Considered as a major form of depression, symptoms include:

Hormones play a primary role in postpartum depression as the levels of estrogen and progesterone plummet 48 hours after delivery. This hormonal crash can result in emotional instability, especially in women who are biologically vulnerable. In addition, stress hormones also go out of whack which adds to a woman’s distress. Furthermore, a history of depression also increases the risk of postpartum depression. Stressful experiences such as lack of sleep and support also worsen the situation.

New dads are not spared too. Around 1 in 10 men experience paternal postpartum depression (PPD) within the first year after the birth of a child. Conventional wisdom would tell us that a mother’s postpartum depression is triggered by hormonal fluctuations, but studies also show that a man’s hormones go into a spin along with the mother’s during and after pregnancy. Testosterone levels drop, while estrogen, prolactin and cortisol go up. Researchers speculate that the change might be about psychologically preparing to be a father.

Around 1 in 10 men experience paternal postpartum depression (PPD within the first year after the birth of a child).

After the baby arrives, the stress of adjustment can also take a toll on a new dad which can lead them to develop paternal depression. They express this through irritability, anxiety, anger, and aggressiveness.

Perinatal anxiety is a distinct and definable syndrome that is tied to a state of anxiety linked to common pregnancy-related stressors. These concerns may revolve around your health, your baby’s health, your impending birthing experience, and parenting role.

It’s normal for mothers to feel anxious even during a normal pregnancy. Since anxiety is so common and expected response to any life transition, one of the challenges that women and care providers face is distinguishing normal or appropriate anxiety in a given situation from one that requires further attention and treatment. Not much is known about it that those affected remain undetected and untreated.

In one Singapore study, researchers found that 1 in 6 participants persistently experienced symptoms of perinatal anxiety. These symptoms may include excessive worry, panic attacks, loss of appetite, restless sleep, chest tightening, or repeated thoughts about something bad happening to the baby. This explains why perinatal anxiety often presents with elements of obsessive-compulsive disorder or panic disorder, but it falls short of meeting the criteria to make a diagnosis. Furthermore, it also overlaps with certain depressive symptoms.

There are available screening tools to help diagnose anxiety disorders during the perinatal period. To improve clinical outcomes, the American College of Obstetricians and Gynecologists (ACOG) suggests that screening should be coupled with the appropriate referral, follow-up, and treatment.

Treatments for perinatal anxiety include talk therapy or Cognitive Behavioural Therapy (CBT), self-help resources, and medications. You may choose one of these options or you may be offered a combination of talk therapy and medications. Physical activity, a shift in your focus, and breathing exercises can also help whenever anxiety attacks occur. Forging relationships through support groups can also help you with this struggle.

This is a type of anxiety disorder that comes with three components, these include:

Obsessive thoughts can be distressing as you wrestle with unwanted thoughts, doubts, images, or urges. These concerns often tread along perfectionism, where you find yourself making a strong effort to get everything exactly right.

Anxiety comes when you feel the need to carry out your impulsive thoughts. The desire to see it through is validated when you feel better after you’ve done it. However, any relief you feel will be short-lived.

There is a specific form of CBT called exposure and response prevention (ERP). This involves talking therapy that will help you understand how your OCD works and how you can overcome it. For this, you need to confront your obsessions and resist the urge to act on your compulsions. Medications may be given to manage your anxiety.

This is another type of anxiety disorder that is caused by certain reproductive trauma. This refers to any experience related to reproductive health events that are perceived as a threat to your physical, psychological, emotional or spiritual integrity.

Postpartum PTSD involves extreme alertness or feeling on edge, avoidance of feelings and memories, and re-living aspects of the trauma. Those who suffer from it may experience intense distress, vivid flashbacks, intrusive thoughts, panic, aggressive behaviour, lack of concentration, and feeling detached/’emotional numbing.’

Postpartum psychosis (PP) is a serious but rare illness compared to the rates of postpartum depression or anxiety. It has a sudden onset which often occurs within the first 2 weeks postpartum. Anyone suffering from it will experience a mix of depression, mania, and psychosis.

Women who are predisposed to PP are those with a family history of the illness, a clinically diagnosed bipolar disorder, a previous psychotic episode, and a traumatic birth or pregnancy. However, you can also develop PP even if you have no history of mental health problems at all. It’s also common in first pregnancies than subsequent ones.

Common signs and symptoms of postpartum psychosis include:

With professional help, postpartum psychosis is temporary and treatable. However, it is considered an emergency and it is essential that you receive immediate help. To manage your mood and psychotic symptoms, you may be offered an antipsychotic drug or an antidepressant. But if you don’t respond to other treatments, electroconvulsive therapy (ECT) is also an option.

With professional help, postpartum psychosis is temporary and treatable.

If you or someone you know may be suffering from postpartum psychosis, call your doctor or an emergency crisis hotline right away to get the help you need.

Mental problems in pregnancy and the postpartum period can be distressing for women. But the good thing is that these problems can be remedied. It takes the right help to overcome these challenges, but more importantly, it takes courage to admit that you need it.

Besides getting professional help for the physiological milestones of pregnancy, don’t hesitate to seek help for your mental health when you sense that something is off. Find caring treatment with Dr. Pamela Tan. Discuss your concerns today through a personal consultation.