A Beginner’s Guide on Fibroid Treatments in Singapore 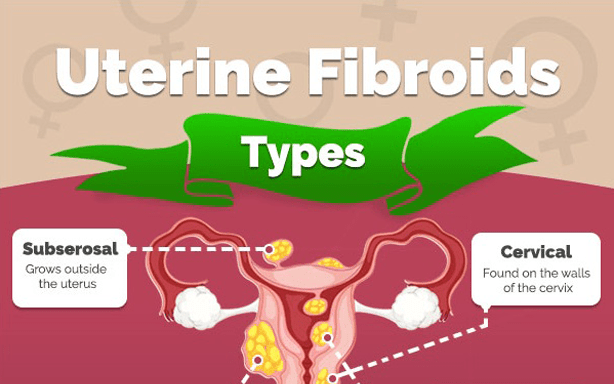 Fibroids are known by many names such as leiomyomas, myomas, myofibromas, fibromas, or fibromyomas. It is a type of growth that develops from the uterine muscle tissue and it is attached to the muscular walls during a woman’s reproductive years.

This guide is intended to walk you through the different fibroid treatments, but we also included the basics about this condition to give you a good grasp of what to expect.

There are four types of fibroids and they are classified based on their location in the womb. These are:

These are the most common type, growing within the uterine walls or uterine muscles. Technically, all fibroids start out as intramural fibroids but they may evolve into other types. These do not cause symptoms until they reach a critical size.

These type of fibroids grow on the outside of the uterus. These have a tendency to progress into pedunculated fibroids where they develop a stalk and can become quite large.

These grow just underneath the uterine lining and into the endometrial cavity. This type of fibroid, even the ones that are no more than an inch in diameter can produce severe heavy bleeding and prolonged menses.

These are located in the wall of the cervix or the neck of the uterus.

There are women who have fibroids but don’t have any symptoms. Some may show mild symptoms, while others have it worse, and the severity can be influenced by size, location, and the number of fibroids. Each individual may experience it differently, but the following are the most common:

If you have any of the following signs or symptoms, it is advised that you immediately contact a healthcare practitioner:

Helps identify the size, number and shape of most fibroids. Using a handheld device called a transducer inserted into the vaginal canal, this procedure allows the doctor to see if there is any abnormality in the uterus, cervix, endometrium, fallopian tubes, ovaries and pelvic cavity.  What makes this different from an abdominal ultrasound is that the latter uses warm water-based clear gel that is applied to the skin of the abdomen. The transvaginal route usually offers better visualization and is performed for patients with prior sexual exposure but both may be performed to give the most accurate characterization.

This is the preferred method for accurately characterizing pelvic masses. It is known to be more sensitive in identifying uterine fibroids. Submucosal, intramural and subserosal fibroids are often differentiated using an MRI scan. Even fibroids in relatively unusual locations can be identified. In the majority of cases, however, it is not required if the ultrasound assessment already gives enough information. It is often indicated if there is uncertainty about the diagnosis or nature of the pelvic mass.

This involves the injection of a dye into the uterus and Fallopian tubes which are then X-rayed to identify the anatomical structures. This may be recommended if infertility is a concern and there is a suspicion that the fibroids are affecting the cavity for implantation or blocking the tubes.

This procedure is done by passing a lighted telescope called a hysteroscope through the opening of the cervix. The doctor injects saline into your uterus to expand the uterine cavity, allowing the doctor to assess the walls of the uterus and the openings of the the fallopian tubes. If the fibroids are submucosal (projecting into the cavity), removal can be performed at the same sitting (transcervical resection of myoma).

This is performed by taking a uterine tissue sample. A small instrument is passed through the cervical opening to obtain small samples of tissue inside the uterus. This may be performed in the case of heavy or frequent menstrual bleeding to rule out endometrial disorders like hyperplasia and cancer.

Your doctor may order a series of blood tests to investigate the potential cause of any abnormal menstrual bleeding. This may include a haemoglobin level to check if you are already experiencing anemia due to chronic blood loss. Other blood tests are done to rule out thyroid problems and bleeding disorders.

Medications are used for the short-term relief of fibroid-related symptoms. These include:

NSAIDs such as ibuprofen and naproxen can help reduce menstrual cramps and decrease menstrual flow in some women.

Tranexamic acid is an anti-fibrinolytic for use on heavy menstrual days that can help to reduce blood loss. It is well tolerated and often one of the first line treatments for patients who present with excessive menstrual blood loss.

The use of contraceptive pills for the treatment of uterine fibroids must be done with careful consideration. Fibroids are very hormone-responsive, which means that it may cause the fibroids to grow larger. However under low doses, birth control pills will not induce fibroid growth. They can also be used to treat the menstrual cramps and bleeding symptoms caused by fibroids.

This is a T-shaped device with a vertical stem which contains a reservoir of levonorgestrel which is widely known for its contraceptive effect. Research has shown that LNG-IUS may be an effective and safe treatment for symptomatic uterine fibroids in premenopausal women.

Esmya has been shown in clinical trials to shrink the volume of up to 80 % of fibroids over time. It appeared to be a good modality of treatment in halting progression during duration of treatment particularly for women with symptomatic fibroids and who were keen for child-bearing. Surgical removal often involves a cut (incision) in the uterine wall. A scarred uterus may result in rupture through the scar during normal labour hence these patients may require an elective Caesarean section for delivery.

Using Esmya to shrink the fibroids buys time to try natural conception and reduce Caesarean sections. However, there has been some associated cases of liver failure reported recently and while investigations are pending on the outcomes no new patients are started on this medication until further notice.

This is the surgical removal of all or part of the uterus, and it is considered the only permanent and definitive cure for fibroids. The doctor may also remove the fallopian tubes, ovaries, and/or cervix during the same surgery. This can result in permanent infertility and is performed for a woman who is symptomatic and have failed or are not keen to continue with medical treatment and have no wishes to bear a child.

The size and location of the fibroids and uterus will determine if it can be performed key-hole (small incisions) or open (bikini line cut) in the abdomen. A laparoscopic or keyhole surgery is an operation that is performed through a small abdominal incision (around 0.5 to 1 cm). It allows better dissection and precision during surgery with fewer chances of internal scarring and infection. Open or conventional surgery requires a longer cut of up to 10 cm which means a longer recovery.

Also known as a Transcervical Resection of myoma (TCRM), this surgery removes submucosal fibroids in the cavity without taking the healthy tissue of the uterus. A long, thin scope with a light is passed through the vagina and cervix into the uterus. This means that no incision is needed. The device allows the doctor to assess the inside of the uterus for fibroids and other problems. Having this clear view of an internal pelvic structure allows the surgeon to perform a localized approach, hence lessening potential trauma.

This is considered a conservative surgical therapy. It involves removing the fibroids while leaving the uterus intact giving the patient a chance at a future pregnancy. Traditionally, a myomectomy comes with a large abdominal incision, however, some specialists are trained to remove it key-hole, making it possible for the procedure to be less invasive with a shorter recovery time.  The chance of recurrent growths after the surgical removal of fibroids is between 15% to 30%.

Patients are advised to avoid getting pregnant for at least three to six months after surgery to allow the myometrium (the muscle of the uterus) to heal. In the instance that a large part of the myometrium was removed during surgery, the patient will be advised to undergo a Caesarean section (C-section) to deliver her baby if every she becomes pregnant again.

This hormone therapy halts the intrinsic production of hormones that cause the fibroids to grow. The smaller the fibroids, the easier it is to remove. This treatment is only considered a “stop-gap” measure prior to surgery because it can induce menopause, hence it should not be used on a long-term basis as it may predispose you to osteoporosis.

This is a procedure that is done to treat fibroids without surgery. During this treatment, a radiologist uses a slender and flexible tube (catheter) to inject embolic agents into the uterine arteries. The intent is to block the fibroid blood vessels which causes them to shrink and die. This is usually indicated for patients not suitable for surgery and is not suitable for patients keen to conceive after the procedure.

This treatment is also known as Focused ultrasound surgery and it is considered a new medical treatment to “kill” fibroids and is suitable for women with few of these growths. It uses focused ultrasound ablation while you are inside an MRI scanner that is equipped with a high-energy ultrasound transducer.

The ultrasound transducer delivers focused sound waves into the fibroid which heats and destroys small areas of fibroid tissues until most or all of it are destroyed. The MRI images give the doctor the precise location of uterine fibroids and the locations of nearby structures. The body gradually absorbs the treated tissue over a few months or years. This is offered in very limited centres with the expertise and not suitable for patients keen for childbearing post procedure.

Fibroids treatment in Singapore will be determined by your healthcare provider(s) based on the following:

Discuss your concerns with Dr. Pamela Tan and act on any gynaecological issues now. Fibroid treatment is not life-threatening but there is something you can do to address any discomfort and problem that fibroids may already be causing you. Book your consultation now and get the right answers.